Aiming in golf is unlike any other sport involving a ball and target. Your eyes and body work better at picking a target from behind the golf ball, not when you are standing to the side of your target. Since AIM is one of the necessary skills involved in excellent putting, it tends to complicate things. For some golfers, adding a line on their golf ball will simplify aiming, which then allows them to focus more on speed. You can easily setup your club face and body based on the line. 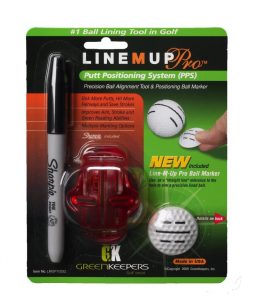 Before I go any further, I want to acknowledge how distinct the art of putting is, everyone has their own recipe for success.

Many tour players don’t use a line because it causes a distraction and would much rather see just the white dimples on the golf ball. On the other hands, several players including Tiger Woods mark and line up their golf ball. This suggests two types of putters, linear and non-linear.

The linear putter would benefit tremendously from a line on their golf ball. These putters usually think of putts in terms of straight lines. Every putt is seen as a straight line, giving them the idea that no putt is different from the next. They see a line that extends from the ball to a ghost hole target and just putt the ball straight. Using Aimpoint Express read to find a starting points is highly recommended.

A non-linear putter tends to use more of their imagination when putting. There is a clear path in the shape of an arch they follow along the ground. If the line is pointing just offline, the non-linear putter will see causing him to lose confidence and make minor modifications to the club face. These players would benefit from just looking at a spot on the ball, or placing it so only white is showing. Subconsciously, they know how to setup and aim. Although it is possible for a non-linear putter to have success using a line, it putts a priority on making sure the line is positioned correctly.

This is where the fun begins. Your job is to find out what works best for you. If you do decide to use the line, I would recommend hitting putts on the practice green going through your full routine. If you spend all your time hitting putts without a line on the practice green then switch to a line while playing, you can see why this could be problematic. Also, establish a trust in the line you have setup from behind the ball. You might get the urge to re-target when standing over the ball. If you make small adjustments with your putter face, you should stop using a line. Practice becoming disciplined in your pre-shot routine to avoid any additional movements or influences. The popular line m up pro is a great golf ball marking tool.

Issues golfers face with a line, may suggest non-linear attributes, or setup problems. The style of putter face can also have an impact on how you see the line.

Often times when trying this, golfer experience a doubt which causes a lack of confidence due to the line pointing to a spot that is in conflict with where you want to aim your putter. It may look perfect from behind the ball, but once you address the ball all confidence is lost. This either causes the golfer to make adjustments to their putter face, (focusing on line) or having to back off and re-aim the line. The line of the ball is usually not where they want it to point, and some golfers feel ashamed to re-mark their ball and start over. If you are trying to make putts, this is not the way to do it. It seems that the golfers frown down upon slow players. Golfers play with a fear of becoming branded as a slow player. Develop a mindset that pays no attention towards what other golfers think about you, especially when you are playing. You can put a lot of unnecessary pressure on yourself from thinking about the group behind you, or the players in your group. Give 100% attention and energy to your own game and focus on the task at hand. Preform any means possible that enables you to make the putt.