Great Ball Strikers – Know How To Spin The Golf Ball

Early in my golfing career similar to a vast majority of average golfers, I was fascinated with any player that could stop the ball on the green. It was even more impressive when I saw the ball hit, stop, then zip back. At the time it was a shot I didn’t have which made me feel like less of a golfer. I once asked a player for advice on how he put spin on the ball. His response, illusive and short. “Oh don’t worry, it will come.”

It seems that when I was beginning golf, any advice in the golfing community was kept hush hush. Really, I was hoping for a more fruitful answer. Something that I could take to the practice tee. Thinking back on his advice, (or lack there of) it’s possible he didn’t even know how he was spinning the ball so much. Perhaps it just came natural.

Well, he was right. It did come and  you can learn to spin the ball for yourself just as I did. I will teach you. Today I have much more control of my golf game because I can regulate the spin of my golf ball. But before I get into the factors that allow for increased spin, I want to preface that spinning the ball is only beneficial when it’s controlled. Simply learning how to spin the ball just to see it backspin on the greens will not take you closer to becoming a more complete golfer. So thinking in term of controlled spin, if you can learn to hit shots with low spin and lots of spin you will develop your skills to meet somewhere in the middle.

The importance of spin rate. The ideal spin for any golf shot allows for the ball to carry the maximum distance and stop upon landing. However there are exceptions that will require a deeper understanding in order to pull off. For example, with my driver I want to maximize both my carry and roll out distance (high launch low spin). For shots around the green I may want to ramp up the spin. I personally believe the “secret” to a great short game is a golfers ability to play shots around the greens with a variety of different trajectories and spins. This is were understanding the dynamics of how to spin the ball will allow you to practice an infinite variety of shot types when you are close to the hole.

The Truth About Spin. I gained a deeper understanding on how spin is created when I looked at attack angle and dynamic loft. Together, both can be represented as spin loft.

Attack angle: The angle that is created tangent to the arc at the moment of impact.

Dynamic Loft: The loft of the club at impact.

High launch low spinning driver. The simplest way to achieve this outcome from your driver is to make contact with the golf ball high on the face. Since loft increases as you move up the face, the launch angle will be higher. But wait, shouldn’t and increase in loft add more spin? ahhhh. Because of something called the vertical gear effect the spin is countered and the shot comes off with lower spin. Hence the desired high launch low spinning driver. 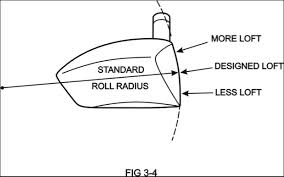 Since with a driver the golf ball is also tee up off the ground, the attack angle can be ascending or descending. The long drive champions tee the ball up very high in order to get an ascending blow which will maximize total distance. Although swinging up with the driver will add more distance to your drives it will also have you reaching in your golf bag. For this reason I like to still have a very slight descending blow with my driver. .5- 1.5 degrees max.

Playing in windy conditions. I know having an early morning tee time will make it a lot easier on my shot making ability. Wind speeds generally tend to pick up as the day goes on and will affect the way the ball travels in the air. Managing the spin rate during a windy day is crucial to controlling your distances. The idea is to play shots with a lower spin rate to increase control in windy conditions. I can achieve this by taking less loft than I normally would and slow the swing speed down.

How to hit the low trajectory high spinning wedge shot. (why you are all here) I always like to save the best for last. Looking back at our options nothing seems to make sense. A high spin loft will produce a shot that spins a lot but it is launched high. Since this shot is close to the hole you can’t just swing faster. But a decrease in spin loft will create more compression which will produce the optimum amount of friction at impact.

In order to achieve this with a wedge your hands have to be in front of the ball in order to de-loft the club. Keeping a very shallow attack angle will allow you to squeeze the spin loft down. I almost feel as if I am lifting up at the ball, but with my hands forward I know I am still hitting down and staying low after impact. This shot is best played off a tight light.

I know when I hit a shot that spins off the green I took the wrong club. Usually for me this will happen somewhere between 70 and 100 yards. It can always be dangerous to swing full out with a wedge in your hand. The increase in club head speed with a highly lofted club can generate enormous amounts of spin. If the wind is at all in your face than you can forget have any control over the shot once it lands.

Just in-case you were wondering: