Ever since I had the dream of playing professional golf I knew in order to make that dream a reality, I had to attend q school. For all those unaware, it can be described as a four month long marathon of a golf tournament. With one stage each month starting in September that lasts until December. At each individual event, roughly twenty players out of eighty will advance to the next stage. In total if a player starts at the first stage (without exemptions) and makes it to the finals in December he will have played 17 rounds of golf.

Ever since the PGA Tour changed the rules, Q School no longer awards a direct path to the PGA Tour. Instead, players will have to play their way onto the tour by finishing inside the top twenty-five on the Web.com tour money list. That is assuming they made it through q school to begin with. If that doesn’t sounds complicated enough, slap a $6,000 entry fee not including travel and other expenses and you are in for what seems to be an adventure with plenty of surprises for everyone that enters.

Every player in the field has a chance to elevate their career. Happening only once a year, with so few moving on, and such a large investment attached you better bring your game.

So, why did I title this Q School Horror Stories? 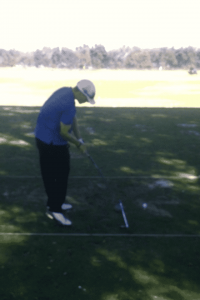 Well, in September 2014, I would put my game to the test with my q school debut. I turned professional the year before and was playing some great golf for a majority of the year. I was placed to play at Yolo Fliers in Woodland, CA for Q school pre-qualifying. Through my preparation up until the point, I was as ready as I would ever be and was excited to take on this challenge. But this challenge turned out to be more than what was expected.

As far as the course was concerned, I arrived two days before the start of the tournament to get myself familiar with the golf course. Playing thirteen holes the first day and nine the next. The golf course was fairly straight forward. It was your classical old style tree lined flat golf course. In my opinion the only real defense the golf course had was its nasty bermuda rough, but not something I couldn’t handle. The weather was going to be ideal for scoring and the greens were in perfect shape. I was ready to go.

My first round was solid. I finished the day with an even par 72 carding a triple bogey, seven, on my last hole. I landed myself in the thick bermuda rough and took a very aggressive approach trying to avoid tree’s that were directly in my line towards the green. Sometimes the ball can do strange things off the club face from lies out of bermuda which makes it hard to judge. The ball went out of bounds into the airport. I would by lying if I said it didn’t leave a sour taste in my mouth, but I also heard 7 was a lucky number. Nonetheless, I was pleased with how I was playing and tried to laugh it off. I still had two more rounds to go.

Charged from the previous day, I started day two out making the turn at four under 32. I was in with 35 for a five under total of 67. I had eight birdies and three bogeys on the day. One of my bogeys came on that dreaded 18th hole again. I had one more day to exact my revenge on that hole. I was -5 for the tournament and in the second to last group. It would be hard for me not to advance. I was pumped.

I was on the road home after the completion of my second round when all of a sudden my stomach began hurting.

The pain grew progressively worse as the day went on and localized on my right side. I lost my appetite, became nauseous and found it very difficult to get to sleep. There are many laws that govern our universe, but I think we can do without you on this one Murphy.

The last thing I wanted to do was withdraw from the tournament given where I stood. I decided to gut it out. (no pun intended) Let’s just say I didn’t get much of a warm up that morning. The best I could do was hit low ground shots that still left me in extreme discomfort.

When you’re close to the lead it’s fun knowing that you can attack and have a chance to win a golf tournament. I was just trying to survive. It was the first time in my short career that I had a gallery following my group. It was awful. They might have thought I was a ringer. I finished the day at +8, 80, to finish +3 total for the tournament, one stroke inside the cut line. I would move on to the next stage.

What was the best part about the day, besides experiencing an emotional tug-of-war?

I managed a par on number 18 and I was off to the hospital. After some tests my suspicions were correct. I was rolled off into surgery to have my appendix removed. Ouch. Fortunately it hadn’t burst which was a concern. Technology nowadays has improved so much with the procedure, recovery times have been reduced by some 2 weeks.

By telling this story I hope it will inspire you to continue to strive for your goals no matter what obstacles you face throughout your journey. I am just hoping for three more seamless stages. Today, I made the cut in more than one way. What doesn’t kill you makes you stronger.

Wishing you all the best of health.

What are your q school horror stories or ones you have heard? I want to hear them!