Face On The New Side Saddle Putting Stroke of 2017

Behold! The Grande Dame of putting strokes – the Side Saddle Putting Stroke or face on putting style.

Golfers that struggle with the conventional style of putting have either quick entirely or have been saved by putting the long putter in the bag. They found solitude with the anchor stroke until the USGA decided to ban the stroke after major championships were won with this style. For these players, I would suggest that face on side saddle is their next option to run to before the USGA decided to get crazy again. In recent times there have been numerous major rules changes with many more in question for future reform. Until then, the side-saddle face on putting stroke is legal and in theory by far the best putting stroke any golfer can use.
If we can say that this method is practically golf made easy, Saddle Putting Stroke is to thank. Binocular vision is 100% better than standing on the side of the ball. Having to stand on the side of the golf ball is what confuses so many putters due to improper eye alignment.

Rather than an arcing putting stroke, the side-saddle putting method has the golfer using a more upright putter to create a back-and-through, pendulum-style stroke that goes right through to the target line. With a close to vertical shaft at address there is very minimal face rotation which will allow you to start the ball on a consistent line time and time again. Couple that with binocular vision and you have a receipt for consistent putting.

If it wasn’t illegal to have a 90 degree shaft to the putter and put with the ball between your feet you would be crazy not to put that way. For this reason side saddle putting was invented because it’s the next best thing. It is my hope that by talking about this putting style more golfers will adopt this method into their games or atleast give it a try.

The pros significantly outweigh the cons and that is exactly why it will be the next big thing; because folks, there is normal putting, and then there is the game-changer – the side saddle putting. You will be exposed to the pros as time progresses and as you become a skilled golfer. For beginners especially, this is a giant step forward in attaining their goals of learning the art of Golf.

Don’t follow the herd; go a little crazy and change up your style of putting! We promise it’s worth it. Touring pro’s like Bryson Dechambeau have recently given this style a try with lots of publicity. 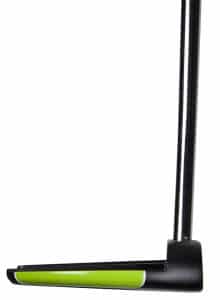 The pinemeadow long putter is a good example of something you can use for this putting stroke. These putting are hard to find at the moment because very few golfers use this style. Standard at 48 inches and 400g the pinemeadow putter is a good start to experiment with the side saddle putting stroke. You are basically looking for a long center shafted putter with a 10 degree lie angle and small head.